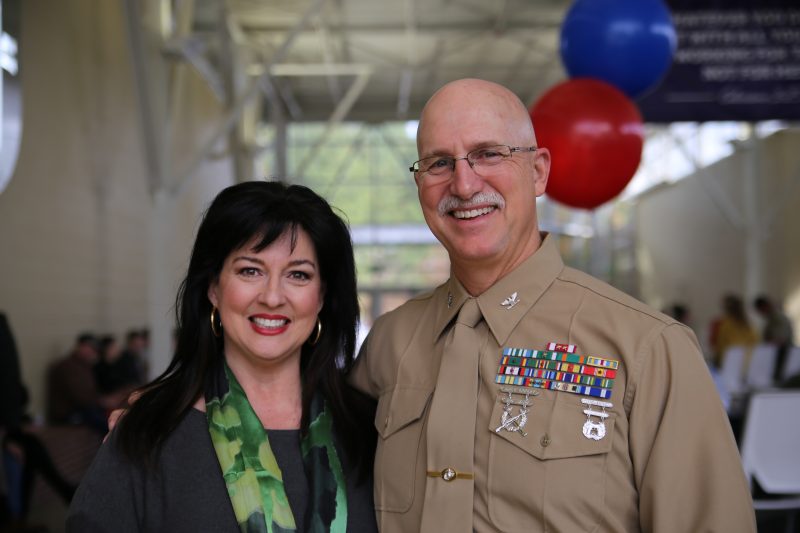 Colonel Russell L. Anderson graduated from Central Arkansas Christian Schools in 1977 as the valedictorian of CAC’s first graduating class. Anderson graduated from Harding University in 1981 with a bachelor’s degree in Social Science and went on to graduate from the University of Tulsa College of Law in 1984. During the second year of law school, he entered the Marine Corps and attended Officer Candidate School in the summer. After graduating from law school, Anderson received orders to The Basic School, attended the Naval Justice School, received his certification as a Judge Advocate and was assigned to Marine Corps Air Station, Yuma, Arizona, as a First Lieutenant.

Col. Anderson was the guest speaker for the Secondary Campus Veterans Day Assembly on Friday, November 9. We sat down with him to discuss CAC memories, his service in the Marines and what being a veteran means.

Colonel Anderson, thank you for taking the time to speak with us! You were part of CAC’s very first graduating class in 1977. What was CAC like back then?
I graduated with eight people, can you believe that? When the high school started, the school leaders moved it out to Jacksonville and added up through the tenth grade. Then they added the eleventh grade the next year, and the twelfth the next. We had one teacher for each subject, and the entire class would move from classroom to classroom. So, one teacher had to teach seventh grade math, eighth grade math, ninth grade math and so on.

There were no sports programs when we first started. In fact, we started the first sports team. The students got together and decided we wanted a football team, so we went to the administration. The rest is history. Before I graduated we had football, basketball and track.

The classes were small, and you knew everybody. It was a blast – we really had a lot of fun.

You attended Harding University and the Tulsa College of Law after graduating from CAC. What first piqued your interest in the Marine Corps?
During the second year of law school a lot of employers would come out and set up interviews for students on campus. I was walking down the hall looking at all of the tables, and I saw a Marine recruiter dressed a lot like what I’m dressed like now. He was sitting at his table, all alone, reading a book. So I figured I would go over and talk to him. My dad was in the Air Force and I had some friends who had joined the Marine Corps, so I knew about the military.

We started talking and I asked him, “What can the Marine Corps can do for me?” He told me about the program, the training and a little bit about what it would take. Then he looked me right in the eyes and said “Let me ask you a question. What can you do for my Marine Corps?”

And that struck me. It was different. That’s what I wanted – that confidence. I wanted to belong to something that was bigger than me. I joined up, and 32 years later I retired.

What were some of your duties during your 32 years of service?
On active duty, I was a judge advocate. Once I went into the reserve, I did all operational stuff. I was the commanding officer on several cases, I was an executive officer, deployed twice with infantry units and combat units. I had a blast. Wouldn’t change it for anything.

Some would say that three decades is a long time to dedicate to one organization. What was the driving force behind your willingness to stay?
I really liked being part of an organization that meant what the Marine Corps means. There’s something about America that I believe is worth the sacrifice. Somebody’s got to defend what we have, because if there is no defense, then what we have will soon be gone. Even though it cost me time away from my family – missed birthdays, missed anniversaries – it was still important to me to be part of something that protects the freedoms we have.

We are honored you agreed to be the guest speaker for our students at the Secondary Campus Veterans Day Assembly. What advice would you give to a group of teenagers who are figuring out what it means to live a fulfilling life?
Become a part of something bigger than yourself – whatever it may be. You don’t have to join the Marine Corps to do that. Whether it’s being involved in your community, your church, your local neighborhood – whatever it is, find something to belong to that is bigger than yourself. Serve. Serve others. Because in that service, you will experience the most fulfilling life. If you do everything for yourself, it’s shallow. There’s no meaning. Find something that’s bigger than you, and become a part of that.

It’s obvious you deeply value service, from your career choice to the way you speak about it so honestly. What helped to foster those values in your life?
CAC was the solid foundation. First of all, you can’t fight this battle of life without a good spiritual foundation. The enemy is after us and if you’re not ready, he will harm you.

At CAC I learned how to set goals and reach them. Like I said before, we didn’t have a football team when I came here. And we wanted one. So the administration gave us a deal – if you raise the money for the equipment, we’ll hire a coach. I think they did that to kind of get us off their backs; they didn’t really think we would do it. But we all went out and raised the money – we mowed lawns, cleaned out garages, washed cars, sold stuff – we did whatever we could do to make some money. And we raised enough to buy the equipment, so they hired a coach. That not only taught me a lot about setting goals, but it taught me how to design a plan to accomplish those goals.

Anyone can set a goal. That’s nothing. Setting a plan to achieve that goal is where the work comes in. Learning how to do that was a process.

Our football team didn’t win a single game that first year. The next year, we won half. And now? The football team made it to the playoffs. You may not benefit from the goals you’ve set, but someone down the road will, and that’s what becoming part of something bigger than yourself looks like. CAC is bigger than me. A lot of what I did while I was here is carried on by you guys now.