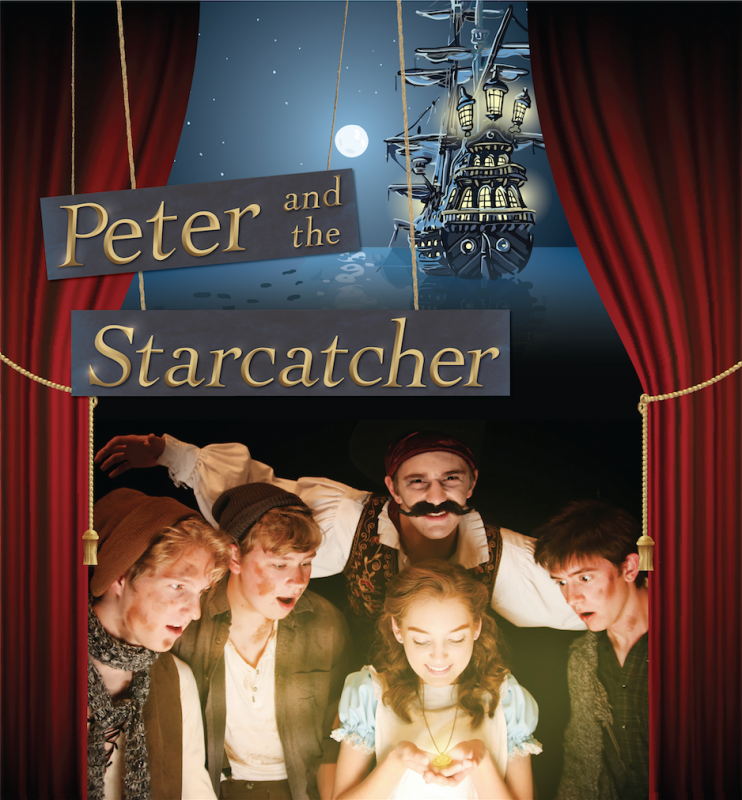 Peter and the Starcatcher serves as an origin story for the well-known, mischievous Peter Pan, whose lesser-known life before pixie dust wasn’t all fun and games. For months, the CAC Drama Department has been hard at work toward one collective goal: to bring the magical world of Peter, Black Stache, Molly, and Fighting Prawn to the Cone Auditorium stage.

Almost 40 CAC students are involved in the production, each taking on new responsibilities as they create custom costumes and wigs, build sets and props, learn tech, lighting and house management, and of course, act.

Sophomore Claire Morrow, who has worked backstage on several previous productions, serves as the Costume Crew Head this year.

“I’m in charge of making sure everyone involved with costumes knows their job, their place and what to do,” Morrow said. “For example, if it’s putting the mermaids together, I need to make sure everyone knows whose wig they are supposed to be in charge of. It’s my job to make sure that the wigs get back on the wig holders and fix them if they got messed up during the [musical] number. Basically, if anything goes wrong with a costume or a wig it’s my job to fix it.”

Holly Cannon, CAC’s elementary music teacher, and Morrow have worked closely over the past few months to develop and create custom costumes and wigs for the entire production.

“I’ve learned a lot already,” Morrow said. “Before we started I had no idea how to work with a wig or handle one at all. Mrs. Cannon has been teaching me how to really put together a costume – like how to turn a vision of a costume into clothes on an actual person.”

Black Stache, the show’s ego-centric villain, played by senior Eli DeMarco, has a pretty iconic look. In only his third role in a theatre production, DeMarco transforms into the not-so-suave pirate with the help of a rather prominent black mustache and large hat, along with other essential pirate items. According to DeMarco, Black Stache and his sidekick Smee, played by senior Faith Carter, bring comedy to the stage and provide an already funny show with some extra comedic relief.

“Going into the show, I figured it would be good,” Bowen said. “But after sitting in the first read-through and seeing people bring such life into the characters, it really added to the whole feeling of the entire performance. I light up when I see Eli come on as Black Stache or when [Faith] Carter comes on as Smee. They really bring joy to the show through their performances.”

In addition to acting as a stand-in for absent actors and making sure the wings are clear, Bowen was in charge of creating and building the set. He said he holds himself to a high standard to produce quality work as the stage managers before him did.

“It’s my goal to make sure the set and show are as magical and wonderful as possible,” Bowen said. “The way the set itself can be incorporated into the show, and the way the actual characters use it and interact with it makes it that much more alive and wonderous.”

What would a Peter Pan origin story be without the Boy Who Would Not Grow Up? The part of Peter is played by CAC Drama Department veteran, junior Davis Burton.

In past productions, Burton has often portrayed larger-than-life characters who require extensive amounts of physical energy and over-expressive gestures to connect with audiences on a comedic level. Burton said he has enjoyed the challenge of exploring Peter’s serious and complex emotions by focusing more on using facial expressions to draw the audience in.

“At first, during the audition process, I was approaching this character as the Peter Pan I was familiar with – you know, the light and energy,” Burton said. “And while that certainly is a part of the character, the Peter of this show is not yet Peter Pan. He has a darker side to his past, and deeper emotions than just a carefree, charismatic kid.”

That hard work seems to be paying off. Assistant Director senior Maddie Beaulieu is the organizational guru with a magic binder, whose job it is to keep track of all important performance details – blocking, stage directions, facial expressions, lines, etc. It’s her job to “know what everyone does at all times.” An admittedly big challenge, but one that offers the reward of watching from a front-row seat as the show comes together.

“I’ve gotten to see them develop into their characters from start to finish,” Beaulieu said. “Right now I love the chemistry between Davis and Jessica. They are both very good actors and they’re very good at what they do, but when they’re together, they draw me in and I feel like I’m really in the story and I don’t want it to end.”

As if the show couldn’t get any more magical, sixth grader Hannah Custer joins the cast and adds ukulele to the list of surprises. Custer portrays multiple roles, one of which is a ukulele-playing pirate. As the only middle schooler in the production, she said she was nervous to interact with the high school students but quickly felt at home.

“At first it was kind of scary, but once I got to know the high schoolers and got to be with them, it was really fun,” Custer said. “I’m excited and plan to be involved in the Drama Department for a long time, and even maybe become an officer one day.”

Something powerful happens when people are driven by a common goal. The cast, crew and faculty members of Peter and the Starcatcher are driven by the desire to entertain audiences of all ages – to offer a bit of magic and thoughtfulness to those who step inside the theatre.

“In my theater classes with Mrs. Thomas she always defines theatre as, ‘The willing suspension of disbelief,’” Burton said. “I think what we want for every show, and especially this one, is for the audience to feel it as if the story were real.  We want them to suspend the fact that this is high school theatre, that those aren’t really pirate ships and that’s not really a giant crocodile. We want them to believe.”