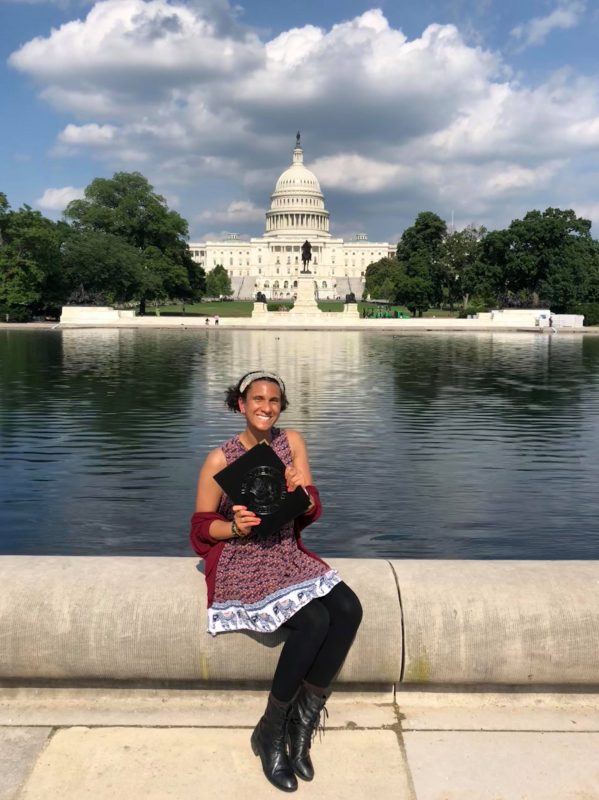 Rachel Mina (’14) graduated from Grand Canyon University with a major in Business Administration and a minor in Pre Law. She recently interned in the United States House of Representatives and currently attends American University Washington College of Law.

Thanks for chatting with us! You’re currently attending law school at American University Washington College of Law in Washington DC, but can you tell us what the journey was like from CAC graduation to where you are now?
My senior year of high school I knew that I wanted to play D1 soccer, so I was guest playing at different places throughout that year. It got to be January and I thought that it just wasn’t going to happen for me. A few weeks later I ended up guest playing at a tournament in Arizona, and Grand Canyon University asked if I wanted a scholarship to play soccer in Phoenix. I played four years of D1 soccer there and graduated in December 2017 with a major in Business Administration with a minor in Pre Law.

Was law school always part of the plan?
I was always interested in going to law school, so the spring of my junior year in college I started studying for my LSAT. The January after I graduated, I started an internship for Representative Tom O’Halleran from 1st District of Arizona on Capitol Hill in the Cannon House Office Building. I did the internship until June, took my LSAT in February, got accepted into law school and now that’s where I am. It’s all been sort of a whirlwind.

That’s incredible! Interning on Capitol Hill is a pretty big deal. How did you get connected with Tom O’Halleran, and what was your experience like working in his office?
The representative I interned for was relatively new – he was a freshman member. I got the internship back when I was living in Arizona because normally they like to have interns who at least know a little bit about the state that they work for. Working in his office was really, really fun. I got to be in these important offices all day and it helped me realize how much of an impact each individual person made. The representative is supported by so many people.

What do you mean?
It’s not just the representatives making the decisions – it’s the whole staff helping the representatives accomplish what needs to be done for the constituents because at the end of the day, those are the people who matter. The constituents who live in your district are the ones who elected you to serve and they deserve your help.

What did a day in the life of a Capitol Hill intern look like for you? What were some of your duties?
We had a lot of different responsibilities. We edited texts, wrote briefs and even got to go to briefs sometimes. I got to go to meetings where I heard very, very important senators and very, very important representatives talk about big issues. I got to hear Betsy Devos talk about the education budget and I got to hear Mark Zuckerberg speak about the Facebook issues.

Another main thing we did as interns was give Capitol tours to the constituents who came in. So we had to learn all about the Capitol – and it’s crazy because I remember in 9th grade at CAC I took a tour of the Capitol, and then years later I was giving those tours. It’s funny to think that I didn’t know where I was going to be back when I was 15.

As an intern, you had the opportunity to pull back the curtain and get a glimpse of what happens in the government on a daily basis. Did that experience encourage you to continue to pursue a career in government?
Honestly, in the beginning, it was more like a learning experience to see how everything actually works.

One thing I realized was that we need to work on getting along. It’s crazy how disconnected each individual office is from each other, even if they are from the same state. But when the constituent basis in each district is so diverse, it’s hard, because at the end of the day, the constituents are your main focus.

I learned that while the government does have issues, all of the people working there are looking towards the best interest of the people. I didn’t believe that when I first started, but being in those offices every day helped me learn that they really do care about the people. That made me feel better.

What are you planning to do once you graduate from law school?
I am looking to specifically go into tax law, and at the end of the day, I’m looking to get into the Ways and Means Committee. I want to become a policy expert. I wouldn’t be writing the legislation, but I would be researching and providing the facts behind the legislation to explain the best route to take for each individual district and the nation as a whole.

Why tax law?
I was told once that you can always go back and be a tax lawyer and work in a big firm once you feel like you’ve done what you can to help the people. I left my internship on the Hill with the realization that we need to help people by putting beneficial policies in place. That’s where I’m headed right now – I want to be an expert in policy while doing something that I feel has meaning.

I really do believe in the government.

In what ways did CAC help prepare you for life beyond graduation?
The teachers at CAC taught me how to study. I learned more about how to study and work hard in my sophomore and junior year at CAC than I did in four years at university. And now that I’m in law school, I’m using the things I learned at CAC every day.

I also really enjoyed Mustang Missions because it brought me awareness. I learned to take a second look at the people around me. Especially here in DC, it’s important to take the extra time to understand how people are living, and I feel like I got that perspective from learning to serve at CAC.