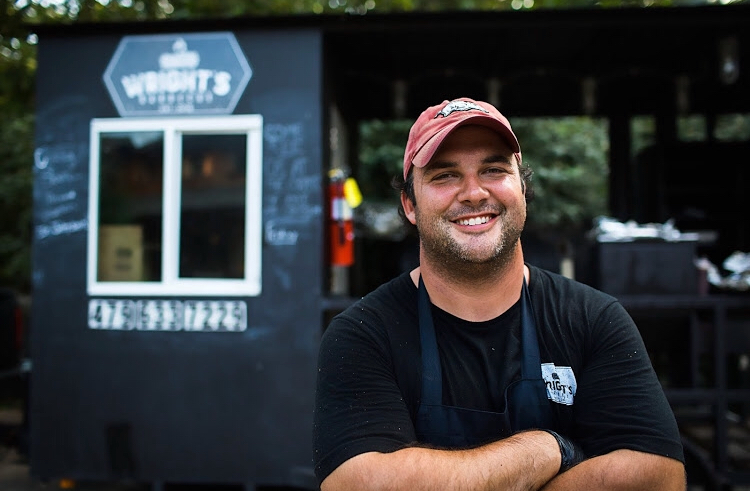 Thanks for taking the time to talk with us, Jordan. We are thrilled to learn more about what you’ve been up to! Give us a brief recap of what happened between college graduation and where you are now.
During college I took a year off to go to India to be a missionary. I ended up getting engaged in India, came back, got married, finished my last year of school and worked at various sales jobs. I did sales, IT, food service sales and then industrial sales with Tyson. So, from around 2010 to 2016 I was doing sales and jobs geared towards food.

What got you interested in smoking meat and ultimately sharing it with people?
My dad got me a Green Egg as a Christmas present to make up for the fact that when I was 12 he got a chemistry set for Christmas and I hated science – it was the worst present ever. So from age 12 to 25 everything was always, “Well, at least it’s not a chemistry set.” One Christmas morning I walk outside and there’s a Green Egg sitting there and my dad says, “Don’t ever bring up the chemistry set again.”

Love that! So then what happened?
Well, that’s what got me into smoking meat. I was doing it for events – I started to cook for friends and family. If there was a birthday party I would smoke a pork butt and bring it over. In 2015 I took a trip to Austin and was able to go to Franklin BBQ. It was 12:30 p.m. and I didn’t get food because they were all sold out. And I said to myself, “This is nuts.” I ended up getting some brisket at another place and realized that Texas-style brisket is really special. If you’ve never had it, it’s just amazing meat. I had never eaten barbecue like that. So I started buying a bunch of briskets and trying to cook it at home. I made a lot of really bad briskets – like a ton.

I decided I would help a friend enter a cooking contest in Texas. He had found a trailer and I started looking and thinking, “Maybe I ought to just buy a trailer.” I was planning to have a catering business and do it on the side, but another buddy of mine suggested I buy a food truck and go to the Farmer’s Market. So I started to look into that and got approved at the Farmer’s Market and began building the brand from there.

We wanted to bring an unbelievable barbecue experience to Northwest Arkansas and we just kept hammering away doing community events. We eventually got to the point where we got a little white building, built a patio area, got the smokers in and now we’ve got a team of 25 and we’re just rocking and rolling.

We assume that when you started the food truck you weren’t expecting to have an actual building and all of this success so quickly. How does it feel?
It’s definitely overwhelming. I didn’t expect it to be this fast, but I figured that if we did the right thing, good things would happen.

During the food truck days, I was cooking everything, and what’s been really awesome for me is that now my team is cooking incredible food and making things happen. Being on this side of the process is crazy to sit back and think about all of the times God has blessed us with relationships with different people who needed a job or a part-time gig. We have a really healthy, positive culture at our restaurant where we respect each other and we care about each other. It’s a lot of fun not being the bad side of a restaurant, you know?

What do you mean when you say, “the bad side of a restaurant”?
We heard so many people say, “Restaurant ownership will kill you” or “Your employees will be terrible and there will be a ton of turnover.” None of that has taken place. It’s been cool to do it the way we wanted to do it. Honestly, I wouldn’t say I’m surprised because the food is really, really good. Once you place that type of food in front of people and you do things right – you make it from scratch and you don’t take any shortcuts, and once you put all of that hard work into it – it culminates into people standing in line for 45 minutes or an hour just to get food. It’s nuts.

What were some of the challenges you faced during the process of opening the physical restaurant?
Early on we underestimated how busy we were going to be. We had to borrow extra cookers for a while and spent time trying to catch up. It was a wakeup call early on that we were a real restaurant and not just some guy in a truck. We started learning how to prep and get ahead of the game.

According to social media and a couple of news articles we’ve seen, you’ve had the chance to feed some pretty big names because of Wright’s Barbecue. What has it been like to know that your food is reaching some important people – and that they enjoy it?
We’ve had the chance to feed the Razorback football team, which was really cool. Adam Wainwright stopped by and ate – he even posted later and said that it was some of the best BBQ he’s ever had.

The best thing is, no matter who it is, our team and their hospitality stays the same. You could walk in off the street and we’ll treat you the same way we treat anybody else. We’re over the top with how well we treat people. We have a bunch of people on our team who just really love to serve.

It’s no secret that your food is good. If you don’t mind us asking, what’s your process?
Barbecue is an open book world, really. You could go to any barbeque restaurant and ask them to show you what they do and they’ll tell you. Our process is simple. We only use Kosher salt and black pepper on our brisket and we just cook it until it’s done. We make sure to use high-end meat.

At the end of the day, we wouldn’t be where we are without so many impactful people from Texas who were willing to lend an ear, listen to me ask questions and let me go work with them.

What is the best part about owning Wright’s Barbecue?
It’s a community and a gathering place. My wife and I both love to serve and she’s amazing at building those types of environments. She’s a great servant and loves opening up our home to people. It’s always been important to us to gather our friends whether it’s at our house or somewhere else.