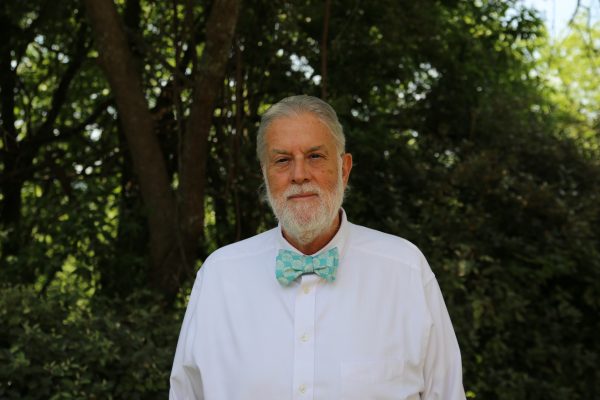 First, let’s get the timeline figured out. A couple of numbers have been floating around, and we want to set the record straight! How long, and for what years, have you been the Athletic Director at CAC?
18 years total, from 1979-1981 then 2002-present.

We learned earlier this year that you will be inducted into the AHSAAA (Arkansas High School Athletic Administrators Association) Hall of Fame. Congratulations! What was it like to find out you will be honored in this way?
We, the AHSAAA, started the Hall of Fame about 10 years ago, and for a few years were playing catch up by inducting Athletic Directors going all the way back to the ‘70s. Now, there are three members a year that are selected. Each year members are nominated by other members, and the Hall of Fame committee considers your resume and history, and then they make the final decision.

I was a good bit surprised that I was informed of it while I was still an AD, because technically you are supposed to have been retired, but the word was out that I was retiring from the profession, so technically I was eligible.

Of course, you’re always honored and flattered that your peers recognize you; that’s always significant. I have bittersweet emotions about my fellow inductees, as one of my very good friends who passed away will also be honored posthumously. She was like a mother to us at the organization, and I wish we had gotten our act together and honored her before she passed.

In addition to CAC, you’ve been pretty active in the state and national Athletic Director scene. Talk to us about the importance of being involved in those organizations and what those experiences have been like.
I think there is significant value to participating in professional organizations, especially those that can contribute to your job’s success and benefit what you bring to your constituents. It’s important that those organizations have substance, and aren’t just junkets or fluff.

I’ve been involved with three organizations, the first being the AAA, or the Arkansas Activities Association. I’ve enjoyed working with and being consulted by them, seeking out answers to problems and making connections. I know beyond a shadow of a doubt that CAC has benefitted from our relationship with the AAA.

We always say that the biggest benefit to AD associations is the networking. Very rarely will a coach give you what he or she has because they are afraid that the information will be used against them to beat them. However, most ADs are more than willing to share the information they have because it benefits everyone. We all fight the same battles and encouragement is always welcome.

The benefit to being involved on the national level is the availability of applicable professional development. It always helps to have things presented to you by people who have experienced the same thing you have. I would say that was the greatest benefit for me until I got to the point where I was able to start giving back and being the teacher and mentor to others. Unfortunately, the national average workplace lifespan of an AD is 4 to 5 years. Once you’ve been in it as long as I have, you become an old-timer (in more ways than one) and you are more than willing to share your experiences to help other people. There’s no sense in making the same mistakes over and over again.

It’s all about education-based athletics. How to defend it, preserve it and make it better.

How would you define education-based athletics and why is it so important?
Education-based athletics is opposed to the rest of the world, where sports are provided by corporations and private clubs. Education-based athletics creates a completely different atmosphere within a school by creating a sense of school spirit, camaraderie and support. There are a lot of lessons that are difficult to teach in the traditional classroom – character, teamwork, perseverance, cooperation, learning to lose, learning to win, learning to work toward a common goal. It’s tough to bring that into the World History or Algebra classrooms, but those skills can be learned in a team-oriented setting. And from my perspective, those lessons are also learned through Fine Arts – be it band, choir or drama, those people are on a team and working toward a common goal.

Your social media always seems to be flooded with pictures from your travels. What are some of the places you’ve been able to travel as a part of your participation in the NIAAA?
I normally travel for two purposes, to either teach professional development or represent the NIAAA as an officer at various meetings and locations. As a result, I have been from Maine to Idaho to California to Florida. I’ve done a little bit of work in Puerto Rico, but the big trip was to Bangkok, Thailand. In essence, I’ve pretty much been from coast to coast to coast to coast.

Speaking of social media, you’re known as @BowTieAD on Twitter. What’s the story behind the name and your activeness on the platform?
I’ve been wearing bowties exclusively for at least 20 years. I don’t know why it got started, but I know why it continued. As for Twitter, I was attending a soccer game about four years ago and sat in the press box with a good friend and Athletic Director, Chris Babb, who is a good bit younger than I am, and a bit more technologically astute than I am as well. We were sitting there watching the ball game and I began asking him questions about Twitter. He taught me about it and explained that I’d need to have a handle to get started. Chris is the one who came up with the @BowTieAD handle, and frequently there have been homages to him and curses to him for that. It’s been good banter between a few of us.

Why do you think Twitter is a good communication tool?
It appears to be a middle of the road social media. It’s not as old-fogey as Facebook, and it certainly isn’t Snapchat. I think it is a good combination of brevity and information, as there are many messages that are ruined by their size. It’s a good way to keep up with what’s going around the state and the nation – athletic associations borrow from each other and retweet information. In short, it’s a simple way to communicate brief information.

What are some memorable events from the past 18 years?
For four years I did a thing called the Monday Minute. It was a devotional, inspirational email that I sent out every Monday, even on the national level. The fact that I did it for four years and never missed a day was what made it memorable.

In 2006, we lost a student in February and a coach in November. Those are memorable to me, though not necessarily happy memories. The spring after Brady passed, we won our third basketball state championship in a row. That was the fruition of the struggles and suffering and pain that we had gone through as a school. It was just one of those things.

In the fall of ’04 our football team had worked and worked and worked and worked and we beat a team on the road in the semi-finals. The pressure was released after that and it then became immaterial whether or not we won the championship game. We were going. It was a testament to how far CAC had come in football from yesteryear with winless seasons and how hard the coaches and the kids worked until we finally achieved and accomplished something. That was a biggie.

If you were to sum up 18 years of being an Athletic Director in one tweet, what would it say?
Like Paul says, you want to make every effort you can so that some people can get a reward out of it. Not everyone can be a champion, not everyone can get the trophy, but we can provide opportunities for those people to succeed.

Previous Post
Class of 2018 at a Glance
Next Post
Mustang Monitor – 5.21.2018
Article: Neurosurgeon, Missionary & CAC Alum
Video: Welcome to CAC
Video: CAC All-Access Spiritual Life
Video: 40 Years of Christian Education
Do NOT follow this link or you will be banned from the site!