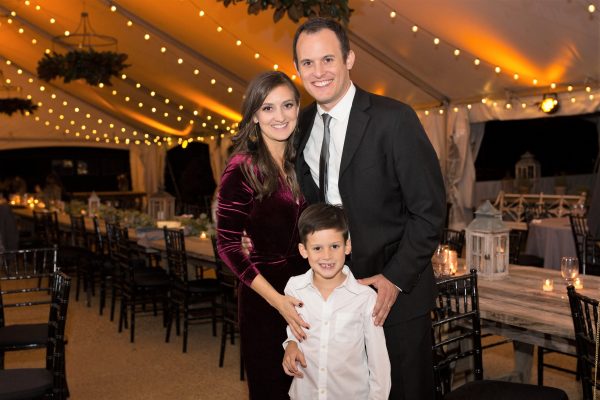 First, tell us a little bit about you and your family.
I was a CAC lifer – PV kindergarten through graduation in 2000. I attended Harding, where I met my wife, Lauren, then attended Full Sail University in Orlando, Florida. We live in Dallas with our 7-year-old son, Eliot.

You are a professional filmmaker, videographer and storyteller. What was the journey like from college to where you are now – the owner of C1 Entertainment?
I did not even decide to pursue film until my junior year at Harding, so I was definitely behind the curve. I got an internship at a production company in Los Angeles the summer before my senior year and absolutely loved it. I came home, enrolled at Full Sail for a film degree and spent an incredible year there. When I graduated, we moved to LA, where I bounced around from job to job, as is the custom while you’re paying your dues.

Long story short, I made a couple such films, one film led to another and here I am 11 years later, producing mostly promo films for non-profit organizations. I have been very blessed.

Is there a specific meaning or story behind the name “C1 Entertainment?”
One of my friends always called me Patrick C-1, as a play on my last name and it just kind of stuck.

Why did you choose to pursue a career as a videographer/storyteller? What is your favorite part of the job?
I had always loved the idea of a job in the entertainment industry. As a child, I built stages around the house and put on “plays.” In seventh grade I took magic lessons and did recitals (which, I might add, did my social calendar zero favors) and not long after, fell in love with music and the drums.

I had always casually enjoyed movies and TV, but it was really not until I saw a couple of documentaries in college that the light bulb came on (Hands on a Hardbody, a doc about a truck giveaway at a Texas car dealership and The September Sessions, a surf film set in Indonesia). I was like, that’s what I want to do!

There are so many things I love about the film industry. I love the pace, I love the gear, I love the feeling of capturing that golden sound byte or moment and I love the travel.

You’ve had the opportunity to document some pretty amazing locations, people and events. Can you describe one (or more) of the most memorable?
That’s tough. It’s been very moving to document the work of the Touch A Life Foundation in Ghana, Africa. They help trafficked children. The past two years, I traveled with Eastern European Mission to Athens and we documented some very powerful stories of refugees from the Middle East crisis. I love Southeast Asia; so being able to document a couple of non-profits working in Cambodia was also amazing.

We were honored to have you film and produce the newest series of videos for CAC. What was it like for you to come back and spend time at your alma mater? In what ways has it changed? How has it stayed the same?
It was an honor to be asked! It was cool to come back and witness what is happening in the CAC community. It was great to catch up with some of the teachers who were there during my time.

Apart from physical changes to the campus, I was really struck by the familial atmosphere. Teachers and students appear to have deep relationships. We definitely set out to capture that aspect beforehand but, in listening back to interviews in the edit, it was remarkable how many people answered questions on that topic literally the exact same way. To me, that was a sign that the leadership has done a great job setting the example. Things like family and mission have always been important at CAC but I’d say it’s more evident nowadays.

How did attending CAC prepare you for life and your current career?
Sophomore year, we had an English teacher named Mr. Liimatta. The first day of class, in walks a tall, well-dressed Finnish guy who bore an uncanny resemblance to Val Kilmer in Top Gun. In fact, he had just graduated from West Point. He commanded us to sit up straight, then spent the rest of the year whipping us into literary shape.

We read The Pearl, Macbeth, Of Mice and Men and Rebecca and did countless reports on each. We dug so deep into each book – had you walked by and peered in the window, it would have been like watching a scene from Dead Poets Society, save for jumping on desks, though we might have even done that a time or two?

Anyway, he absolutely blood bathed my reports and I barely passed the class, but I gradually began to think critically about story and story structure for the first time in my life. I owe so much to Mr. Liimatta. He was one of the best teachers I’ve ever had.

What are some new projects you are looking forward to working on in 2018? Where can we follow your work?
I’m still lining out projects for the year and I have a feature documentary in the works but you can always check out what’s going on at vimeo.com/C1entertainment.